For more than 50 years, FLOS has sought to illuminate the human experience by offering finely crafted pieces created by the world’s most beloved artists. We do it by remaining true to our core values. This is our FLOSOPHY:

We believe that light is more than just a basic need, it is a living substance that helps us to express new ideas and explore new emotions. It makes sense of the past, it brightens our present, and it lends brilliance to the future.

We align ourselves with the masters of design. From the legends to the new talents, we are proud to work with artists who are tuned into the cultural conversation, who look to better their work by making it as sustainable as it is beautiful, and who demand nothing less than excellence—from themselves and those around them.

We believe that provocation is a necessary element of evolution. We embrace the revolutionary spirits of our designers—we encourage them to seek out new poetic notions of functionality while staying ahead of the latest technological advancements.

We believe in experimentation. It is how we have discovered some of the most influential and iconic elements of our work. No effort is ever wasted.

We trust our intuition. We have confidence in our work and the work of our partners.

We have fun. We offer pieces that are serious about their sense of playfulness and irony.

We know our place. FLOS stands at the meeting point of art and design, of craftsmanship and industry, of limited editions and large scale manufacturing, and of the individual and the collective imagination. It is a unique space, and it is where we work best.

Our FLOSOPHY is the undercurrent that informs all of our work. It is what defines us—and what sets us apart.

Italian entrepreneur Dino Gavina and the small Eisenkeil manufacturing facility in Merano, had already been creating furniture alongside design masters such as Achille and Pier Giacomo Castiglioni, Afra and Tobia Scarpa. 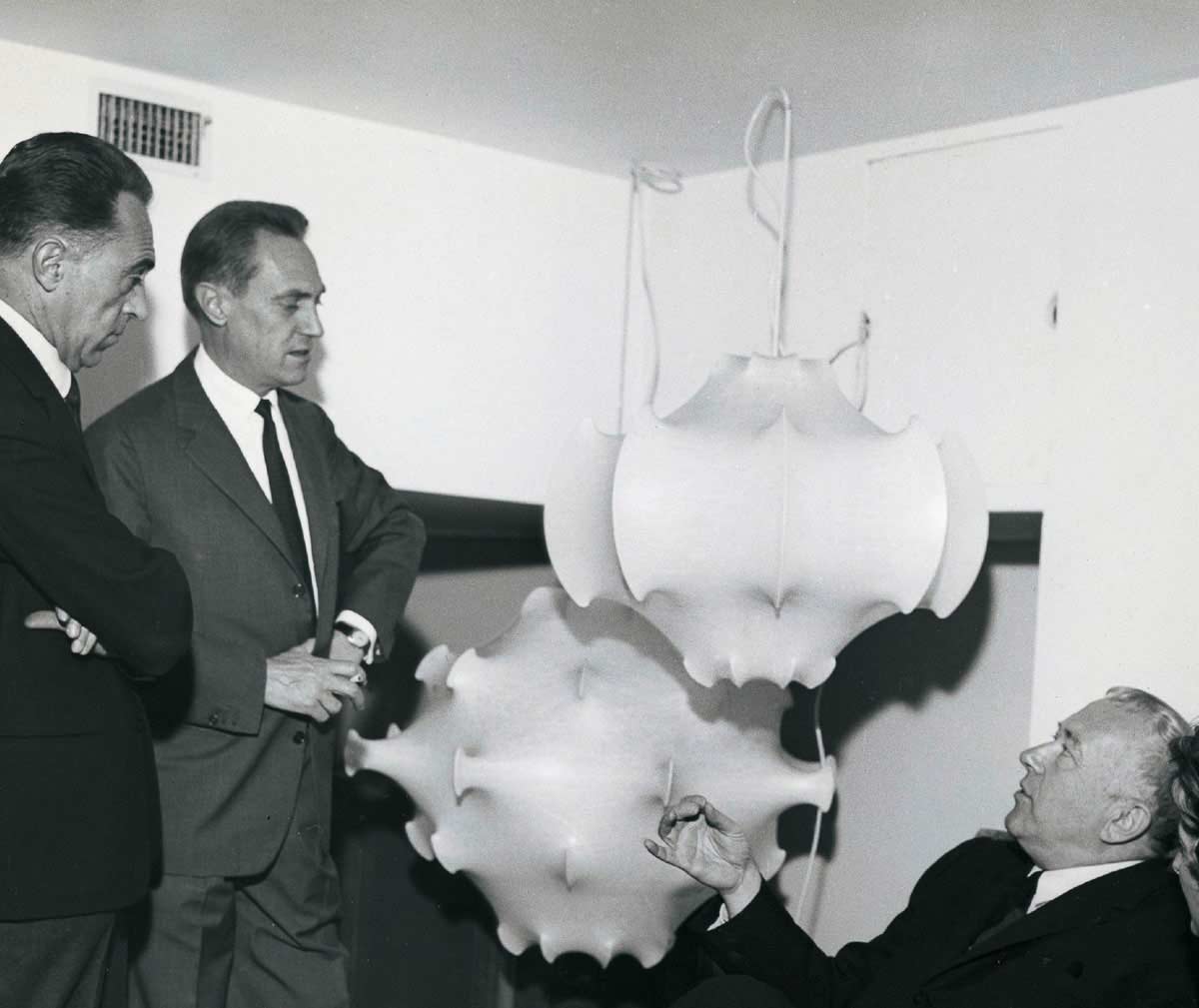 Using the same technology – conceived in the USA and tested at Eisenkeil – used for the Cocoon lamp, the Castiglioni brothers and the Scarpa duo began creating lamps such as the Taraxacum or the Fantasma, with many other beautiful and surprising lamps to follow. 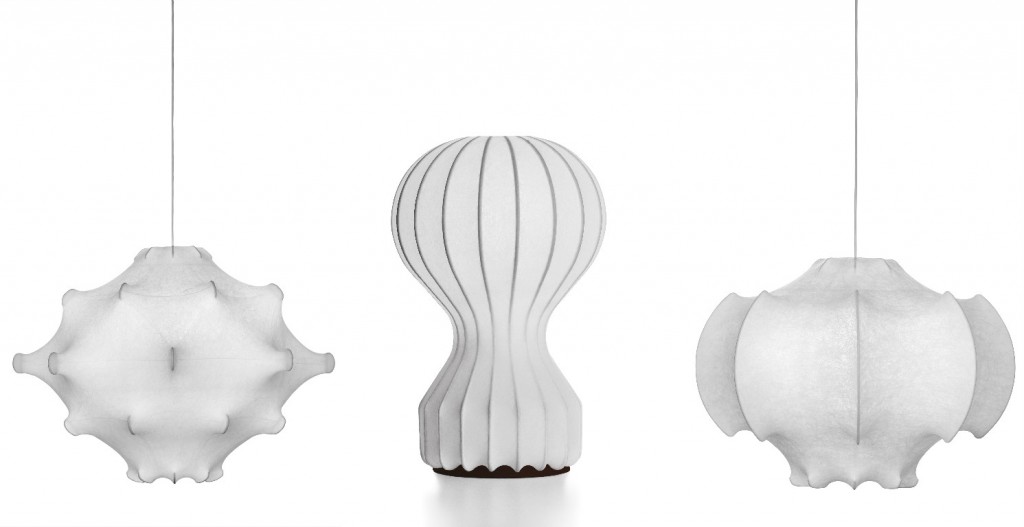 And so, from day one, Flos was already reinventing the idea of artificial lighting.

How do you transform an industry into a laboratory to revolutionize the “lamp” concept?

For Sergio Gandini, who began managing Flos in 1963, the company’s endeavors and creative fantasy could coexist without contradiction; the combination of the two would bring success to the brand.

Relocating to the industrial district of Brescia allowed for a conducive environment for designers, resulting in products such as the Bauhaus-inspired Jucker lamp by Tobia Scarpa or of the revolutionary Arco by the Castiglioni brothers.

Flos’ strategies were based on what we would now call a Think Tank, establishing the company as a longstanding pioneer in Italian design. 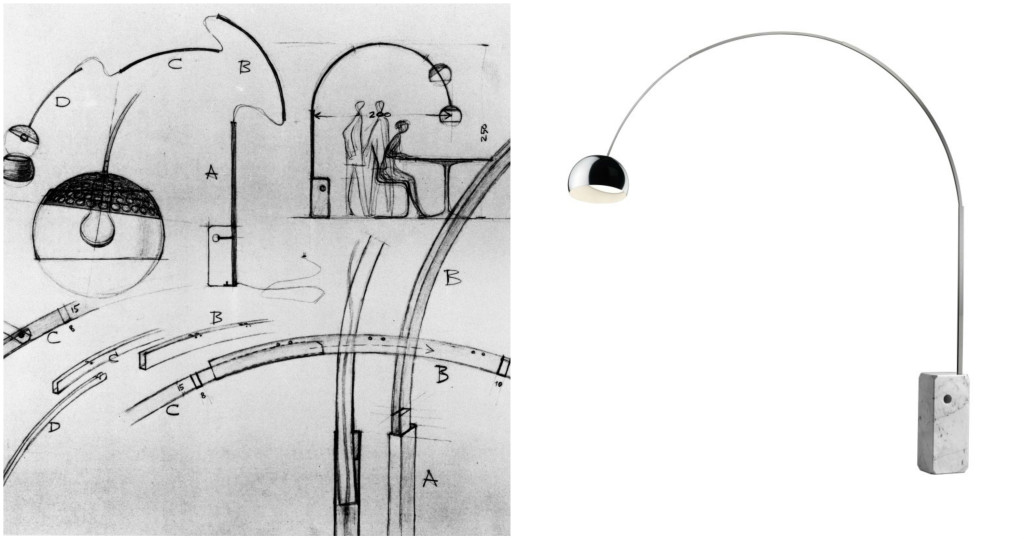 In 1972, the “Italy The New Domestic Landscape” show at New York City’s MoMA– the most important museum of contemporary art in America – was a phenomenon of unprecedented popularity celebrating the culture of art and industry.

Flos was featured in the show with several pieces – in particular by the Castiglioni brothers – consolidating the brand as an international avant-garde company. From that moment, the firm’s development and its popularity went hand-in-hand. 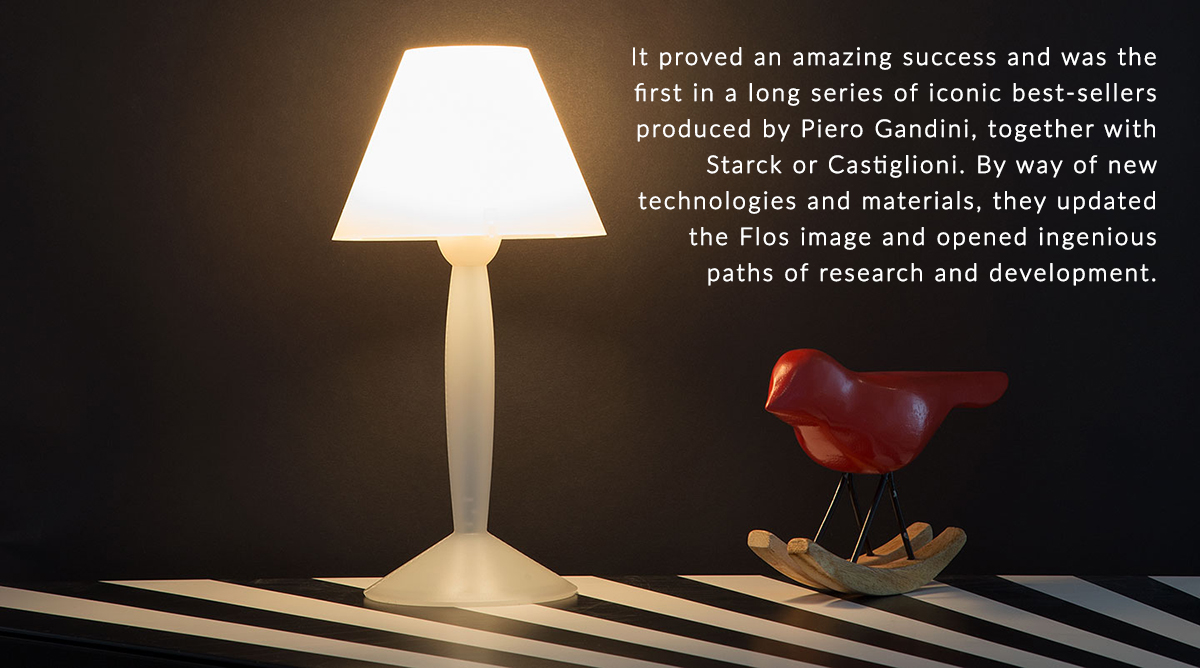 Defined by Starck as: “What everybody subconsciously thinks a lamp is.”

Under Piero Gandini’s management, Flos focused on the harmony between iconic forms, artisan craftsmanship and mass-production technology. However, the crucial step towards change came with the realization that contemporary objects can be a form of expression, with as many stylistic interpretations as there are languages in the world.

And so, Piero Gandini called upon the most promising talents in international design: from the “futuristic” style of Australian Marc Newson (with his Helice Lamp in 1993), to the English prophet of minimalist design Jasper Morrison, to Konstantin Grcic, the most refined and eclectic German designer.

International talents also joined the communications team with the arrival of advertising superstar Bruno Le Moult and famous photographer Jean Baptiste Mondino who created unusual and captivating images of products old and new alike. As Flos entered the new millennium with the passing of the great founder Sergio Gandini, they had already established themselves as an industry well-equipped to face the challenges of globalization.

Avant-garde and the contemporary

For Piero Gandini, developing a new Flos identity meant having the courage to make radical choices. Tackling the onslaught of LEDs in the realm of lighting was to be the first step in a second revolution of production which he started in the early 2000s with the acquisition of Federic Martinez’s firm Antares.

This led to the creation of Flos Architectural Lighting – dedicated to professional lighting for large-surface areas and public spaces. Piero discovered new designers and put them to work creating lighting architecture using the most advanced technologies. These very same technologies were used to create works of art such as ‘Ohhh!!!’ and ‘Ahhh!!!’ sculpture lamps in Baccarat Crystal by Starck, enlivened with some ‘Truisms’ by American Jenny Holzer (the critical statements against consumerism values – a contradiction as they were engraved on luxurious, desirable objects).

And so began, with this combination of art and technology, production that would go beyond the usual conventions – for an adventurous journey with no turning back.

“Today, like never before, we must find the synthesis of emotions, technology, poetry, needs, messages, aesthetic and political values. It is not just changing the technique but the society itself and our behaviors, both public and private. We must push beyond our capabilities and imagination to improve people’s lives… with the same poetry as the light in the ancient flame of a campfire under the stars.” As Piero Gandini declares.

If the future is now, what will artificial lighting of tomorrow be?

In the Flos vision, there are and always will be totally new types of lighting. New ones that have to be studied, developed and produced with a radical, groundbreaking attitude, and still balancing it with the cultural rigor on which Flos was founded.

All lighting environments must be designed like this, starting from the house, with the Home Collection. The 2017 collection is a prime example, where the architects, designers and design-artists have been creating the icons of tomorrow, producing lighting fixtures as sculptures, balancing acts of form, playing games.

As Philippe Starck says: “There is no difference between artificial and natural light. It’s just a matter of transmission – ions and photons remain the same.”

The Flos Architectural line encompasses a wider, environmental vision to include the workplace, entertainment and even the non-places of mass consumption.