Studio Visit with Barber and Osgerby

Studio Visit with Barber and Osgerby

It has been nearly thirty years since Edward Barber & Jay Osgerby started their collaboration. Looking back, it was a serendipitous experience that kicked off with a friendship at the Royal College of Art in 1992, and shortly after turned into a studio from the flat they shared in Notting Hill. After graduating from the architecture masters’ degree, their time was spent on built projects, but they both had a passion for a smaller scale, so eventually gravitated towards furniture design and have been creating for design titans ever since.

Based in London, yet truly international, the studio is home to many lighting projects from the Olympic Torch in 2012 to the 2016 Bellhop (and its 2020 Floor version) lamp for Flos. With an outlook focused on longevity, they have navigated the pandemic by having an adaptable, multi-floor studio space. Over Zoom, they shine a light on their story of three decades while sitting inside their east London studio, surrounded by their works. They tell tales of the Japanese bowl that inspired Bellhop, compare color choice to naming children and explain turning up their design game for historic companies. 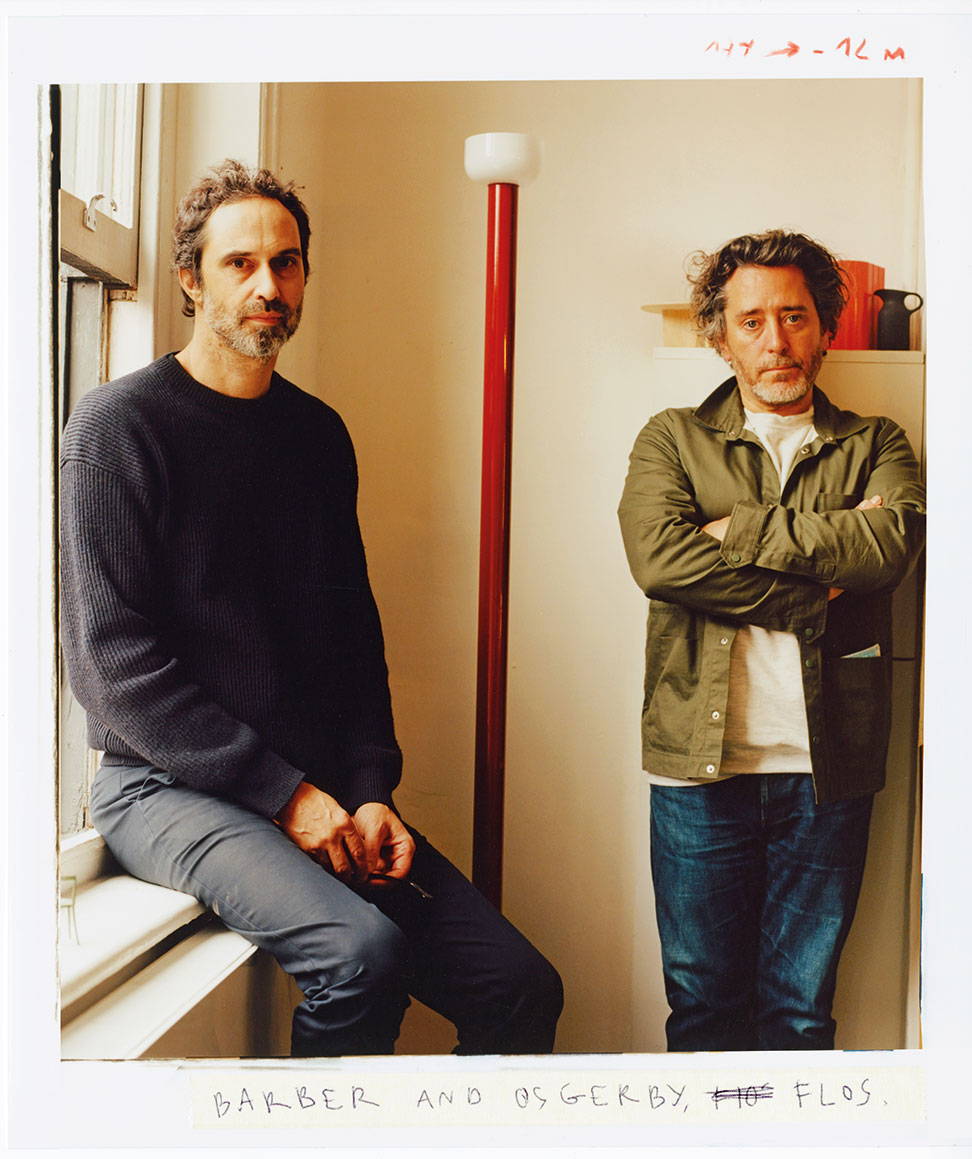 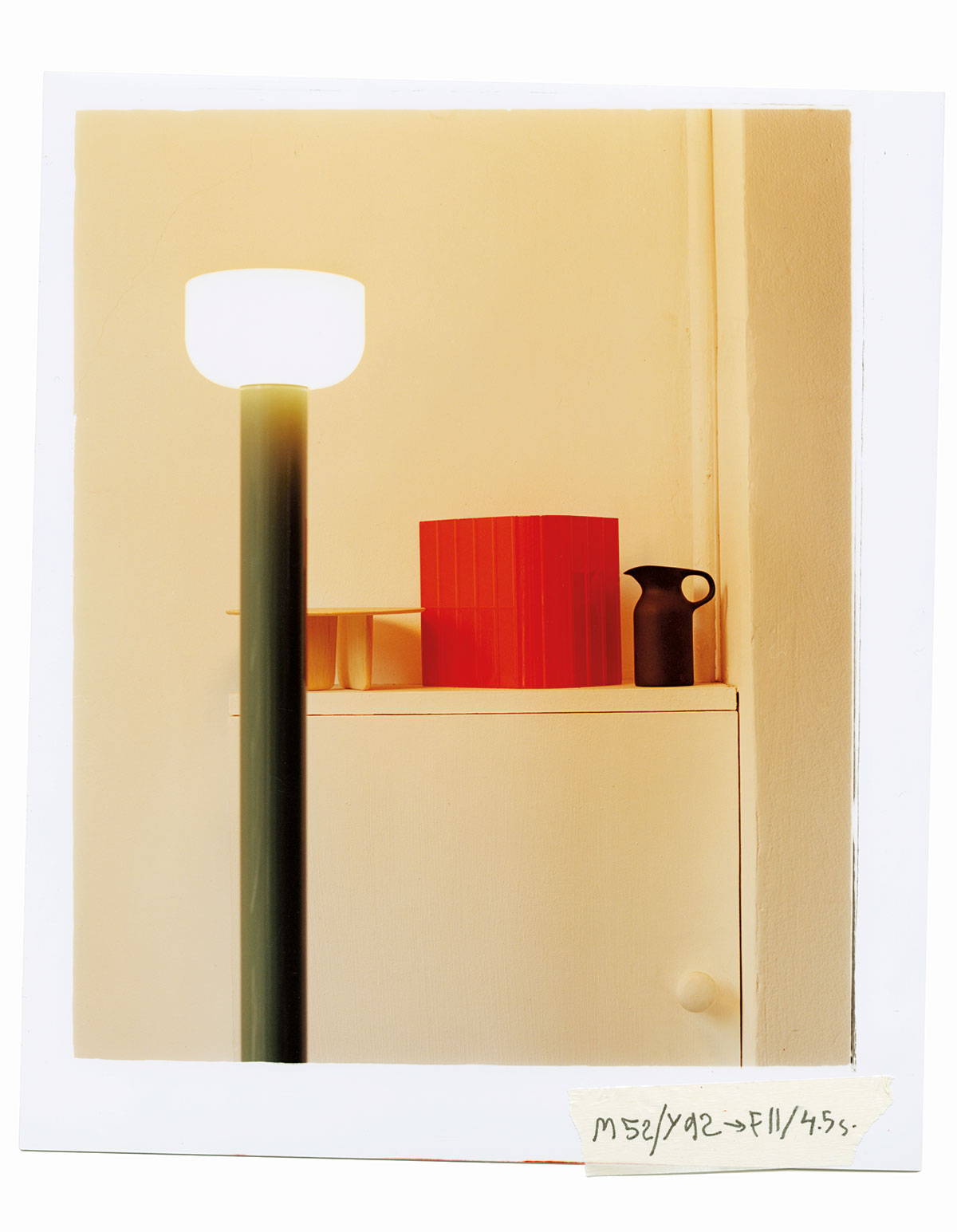 SUJATA BURMAN: Your studio has had multiple London locations over the years, how has this informed your practice to date?

EDWARD BARBER: After our flat in Notting Hill we moved to Trellick Tower – it was on the 22nd floor, we had an incredible view. I lived there for about six years, we had the studio there for three. Then we moved to the Isokon workshops (in Chiswick). That was really great because we were close to the wood workshops, we learned a lot about furniture making there, and particularly about plywood.

A lot of the early pieces that we designed were plywood because we were right there by the workshops. We were doing small architectural projects at the time and for one of them we designed some restaurant furniture. One of the pieces was a low table, the Loop Table, which is in birch plywood. That table was really a stepping stone into the furniture world because the table was seen by Giulio Cappellini in 1997. At the time Cappellini was the most interesting furniture company working with both young designers and established designers, and [Giulio] said he wanted to produce it. So we got a leg-up right from the first piece we designed. I think that was the moment when we changed our focus, when we realised that we were much more interested in designing furniture than architecture.

JAY OSGERBY: Partly because it’s a faster process. When you're doing an architectural project, you only ever make a prototype. You never actually get to produce. You don't get successive opportunities to change, develop and iterate an idea, whereas in furniture and product design, you do. 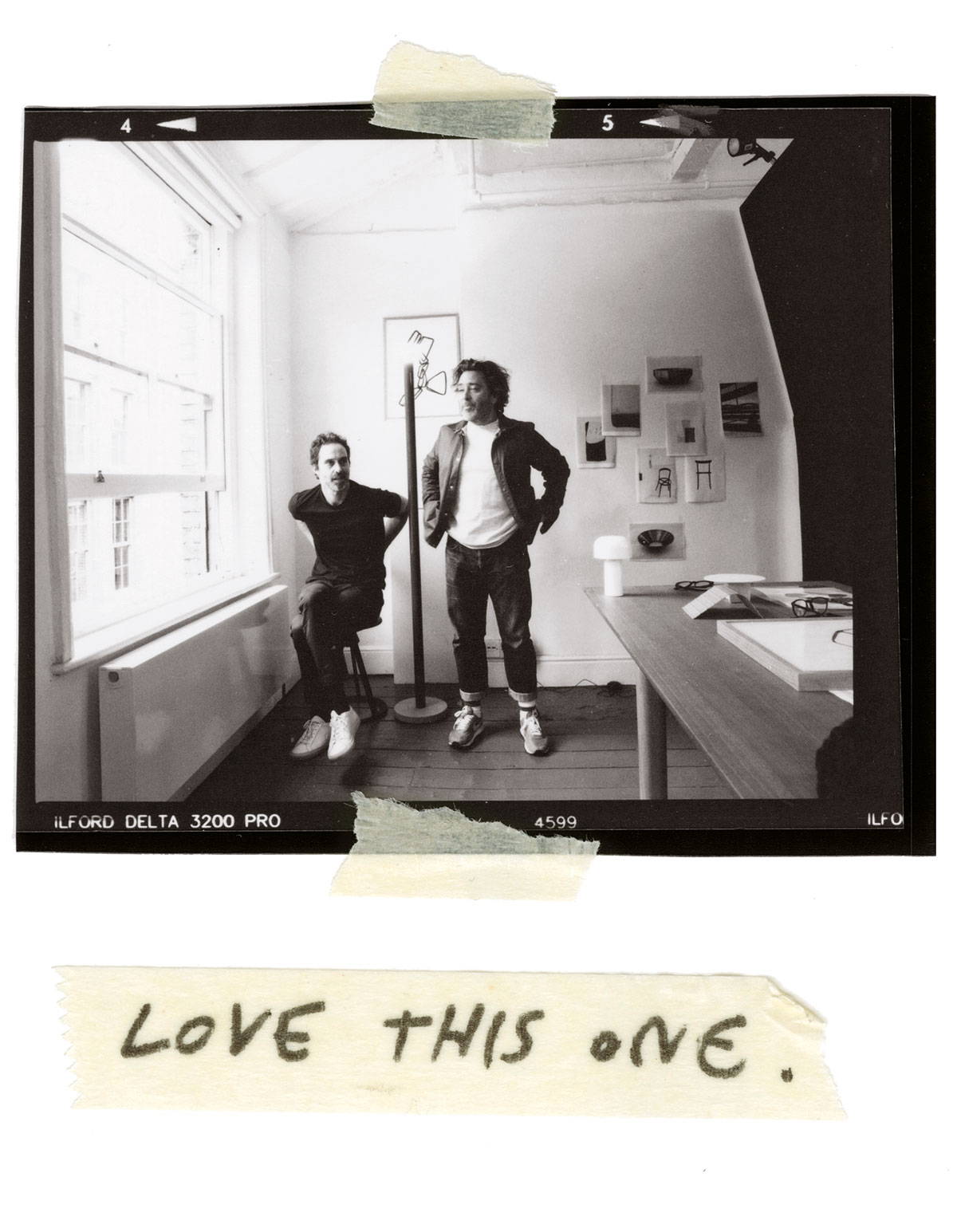 SUJATA BURMAN: There must be a connection to the material straight away that you don't get with architecture.

JAY OSGERBY: You rarely get it at all with architecture, at least not in the same way.

EDWARD BARBER: You get a lot more control than with architecture, where there are so many unknowns…

JAY OSGERBY: Furniture is the layer that goes between the body and the building. Humans in buildings are just rattling around, and it's actually furniture scale objects that act to bridge the scales: Building to Human.

EDWARD BARBER: If you take a blank white room, it doesn't really say as much until you have an object in it. A beautiful chair and table will completely transform that space. Furniture helps to define spaces.

JAY OSGERBY: Otherwise you're in a situation where there is an amazing space with natural light, then it gets cloudy, there is no light, and nowhere to sit. 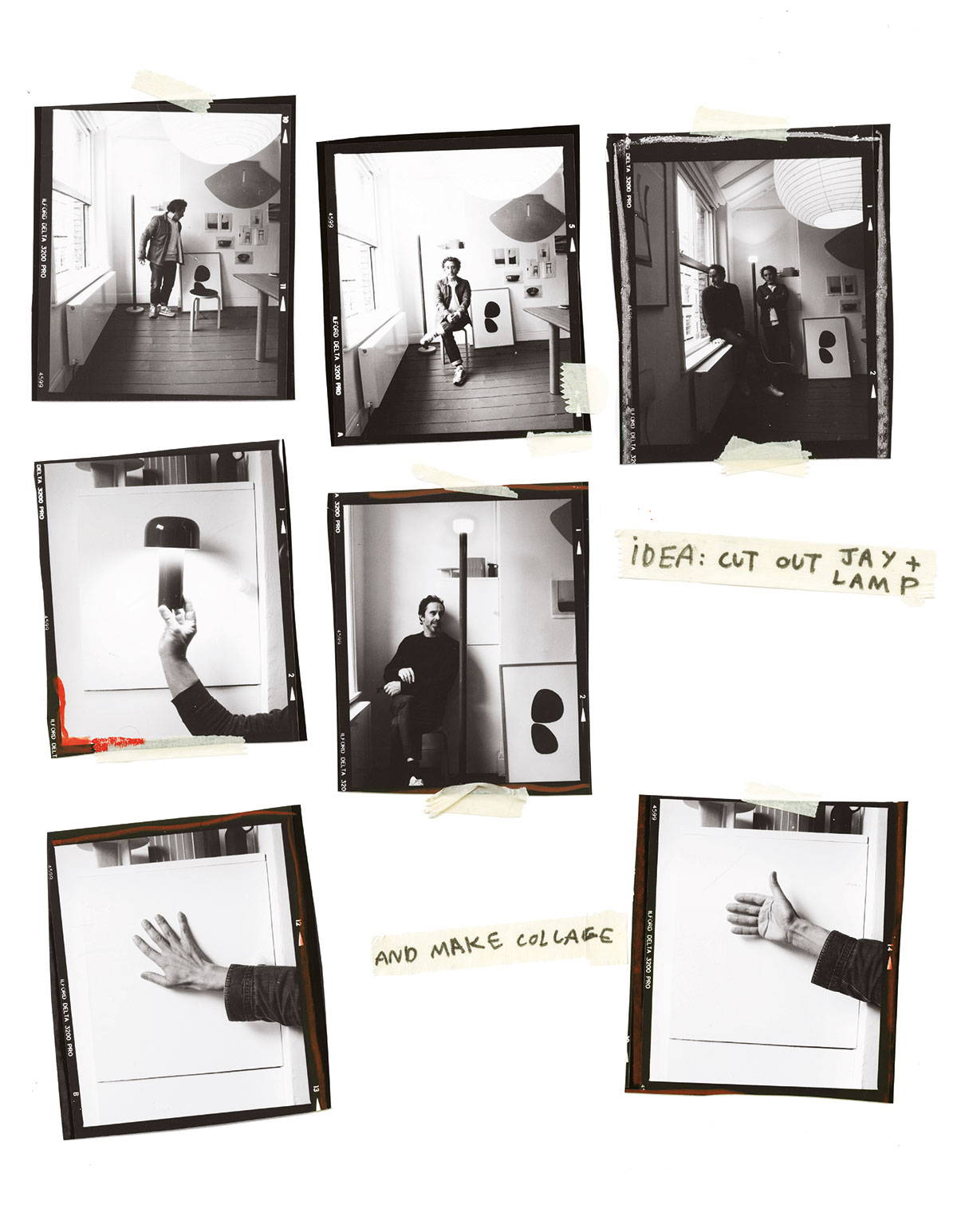 SUJATA BURMAN: Speaking of light, how did you get into designing it?

JAY OSGERBY: Back in the early 2000s, we had four or five ideas for lights and we knew at the time there was only one manufacturer that we wanted to talk to, and that was Flos. So we spent a great deal of time getting a series of projects to propose. We've always had the idea that we set our sights on the best manufacturer in each field, and that's how we approached it with Flos.

EDWARD BARBER: We launched our first project with Flos in 2007, which is the Tab lamp. We both have it in our homes and studio, it is a good little work lamp. That was a good success, and then it was almost 10 years until we did another really successful lamp which was the Bellhop.

JAY OSGERBY: I think we've always preferred the light from lamps. One of the things that tends to happen a lot in architecture is that
the architects and lighting designer do the very best to make the space look as dramatic as possible. They don’t necessarily think
about creating the intimate environments, which is what you get with lamps. On the whole you get a better lighting quality from a lamp – again, it's more human. 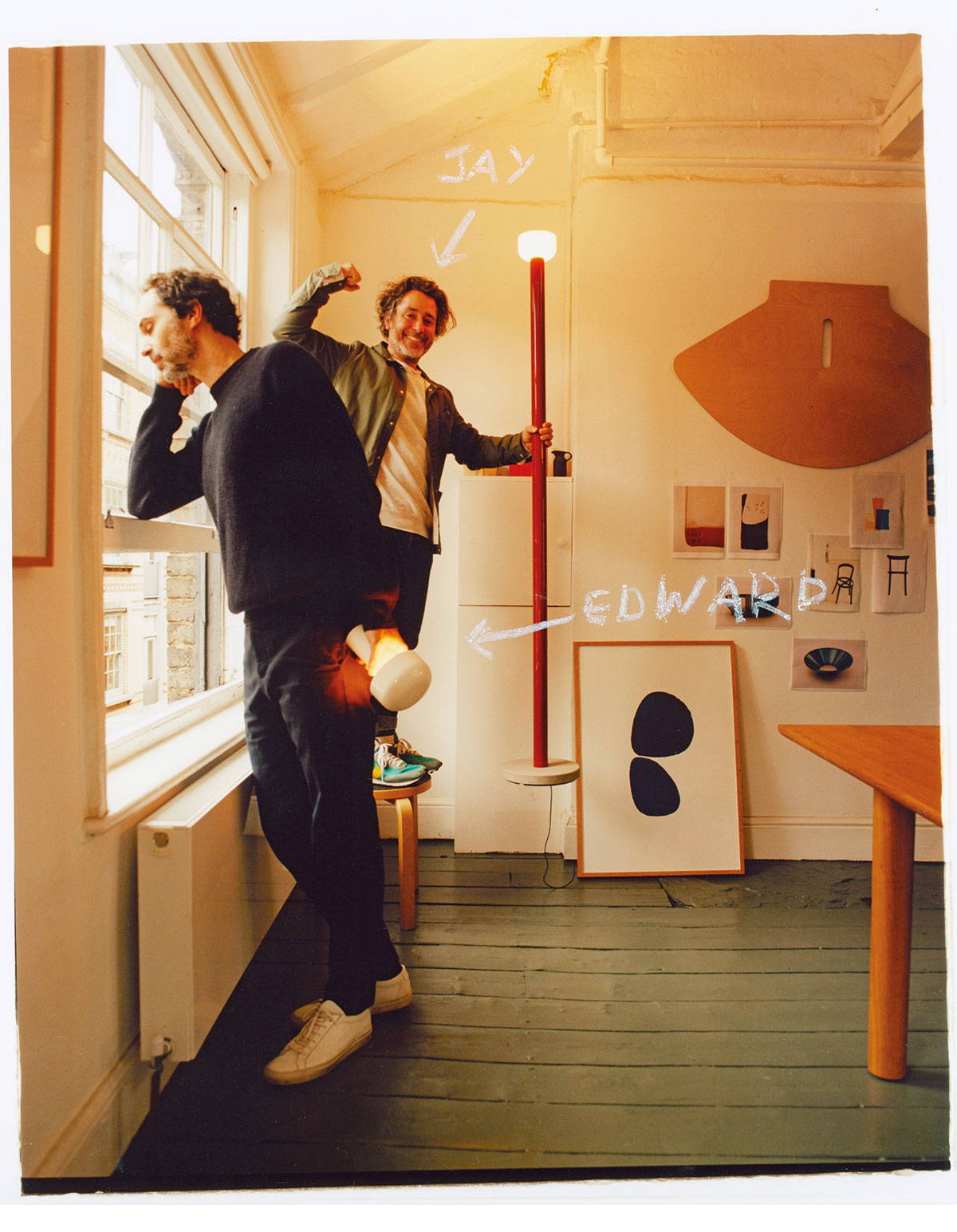 SUJATA BURMAN: What is a day in the studio like for you?

JAY OSGERBY: Before lockdown, we spent half the time here, and half the time overseas [visiting our manufacturers]. It's a constant thing, swinging between looking at prototypes, sketching ideas, talking about things, sitting on things, trying to break things, try things out. Until recently, we did quite a lot of talks and lectures too.

EDWARD BARBER: When you launch a new product, depending on the company and their ambition for the project, they will often
send you off around the world to promote it… whilst that can be fun it's nice to be at home more with the family now. I've been coming into the studio since May, pretty much every day. The studio hasn’t been full since February, so we haven't had that team feel for quite a while actually, which is a shame.

SUJATA BURMAN: Tell me a bit more about the Bellhop lamp. When was it first designed?

EDWARD BARBER: Originally we created it for the restaurant in the London Design Museum in 2016. Flos really liked it, and decided to produce it. Then we launched it in 2017 at EuroLuce. The idea was that the restaurant could charge them during the day, and at night they put them on the tables. But, once we designed it we realised
it was such a nice object to have around the house. You can walk around with it, and it's like a little friend that you take with you. It's basically like having a candle that you move with you from room to room.

JAY OSGERBY: They were originally metal, and just a small batch production. 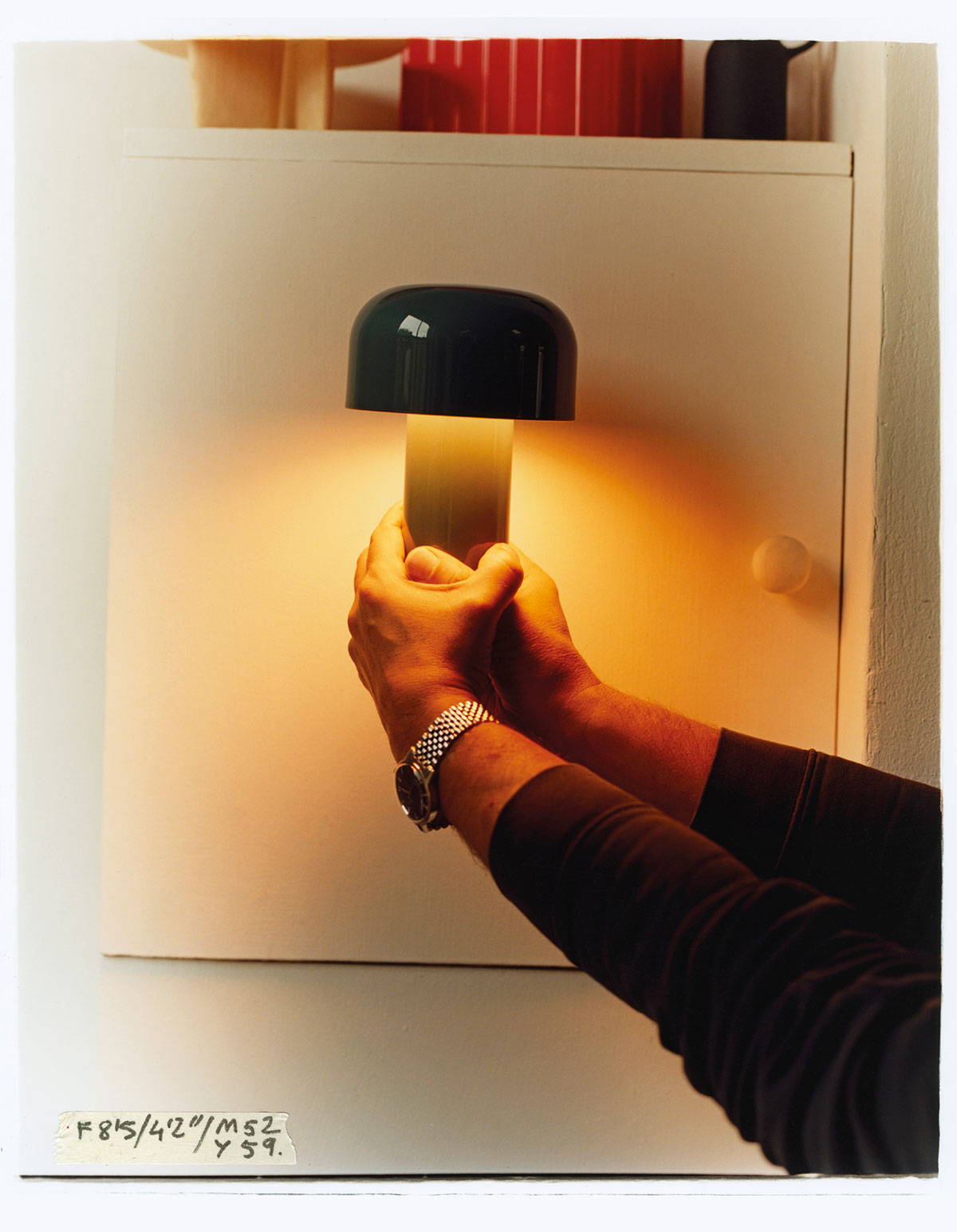 SUJATA BURMAN: What was the initial inspiration around the shape?

JAY OSGERBY: When we were talking to Flos about the Design Museum project we happened to have a really beautiful Japanese bowl in the studio. We simply dimmed the lights and shone a torch into the underside of this bowl. The reflected light that bounced from the porcelain was really beautiful. So we thought, how could we recreate that? That was the starting point, as abstract as it sounds.

EDWARD BARBER: In a restaurant, you want to have reflected light off the table. You don't want to have a glaring light on a table between people who are facing each other. So this lamp was always focused around having light coming down and bouncing up off the table surface.

SUJATA BURMAN: Let’s talk about the rechargeable element of this lamp. What is the studio’s relationship with technology?

EDWARD BARBER: What's interesting is that 10 years ago it would not have been possible to make this lamp, because the battery life was so poor, it would have lasted maybe an hour or so. Whereas now, if you have it on its lowest setting (it has four settings) it lasts about 24 hours and in time it'll get better and better. If Flos are making this lamp in 10 years time, you’ll only need to charge it once a month!

JAY OSGERBY: I think technology works when it's invisible, it's not something that we want to really show off. It comes as more of a surprise, in the way that you use the objects rather than something that's actually overtly tech-driven. Even the Tab lamp used a halogen light bulb at first, then it needed to be swapped to LED – that was
weird for us, that transition from replacing a bulb, to where the technology is baked into the product itself. 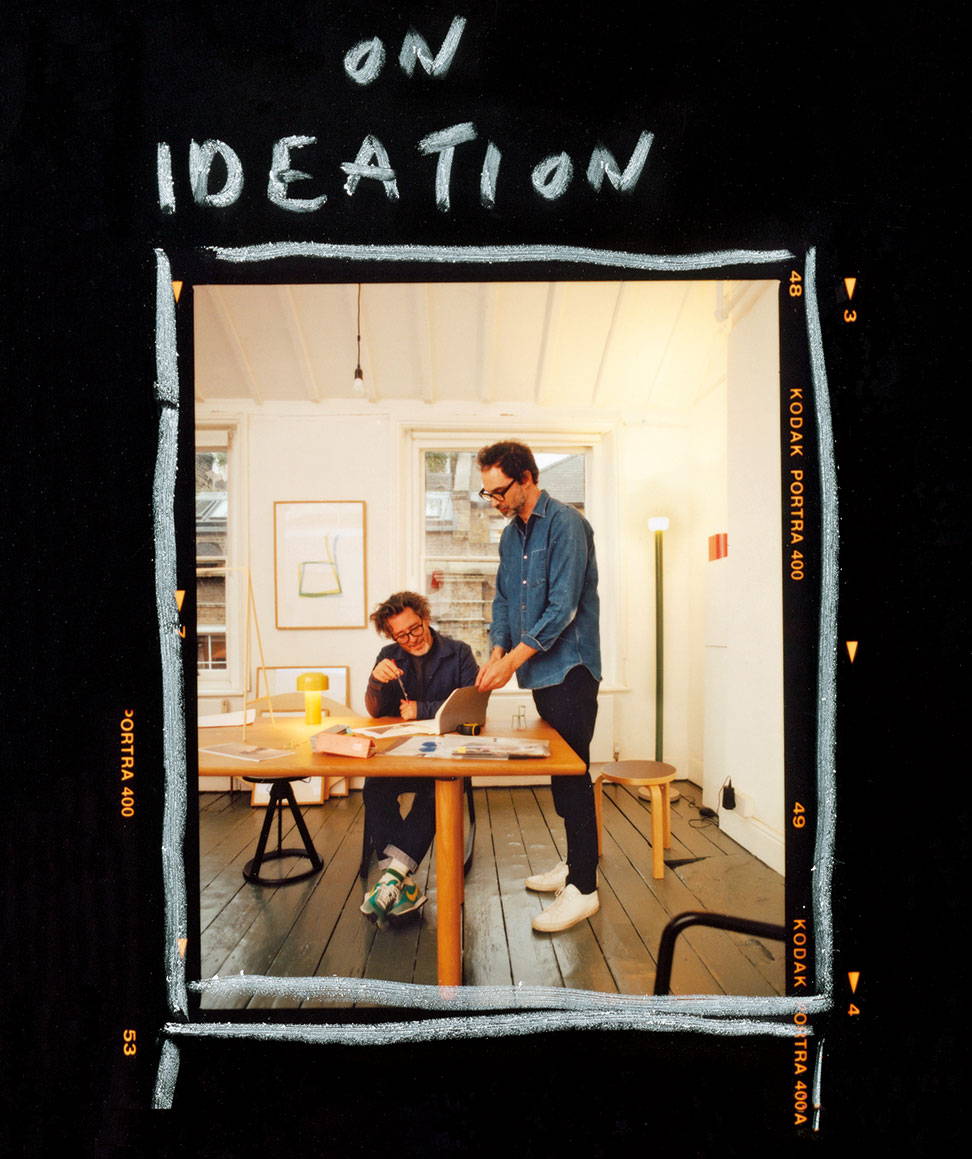 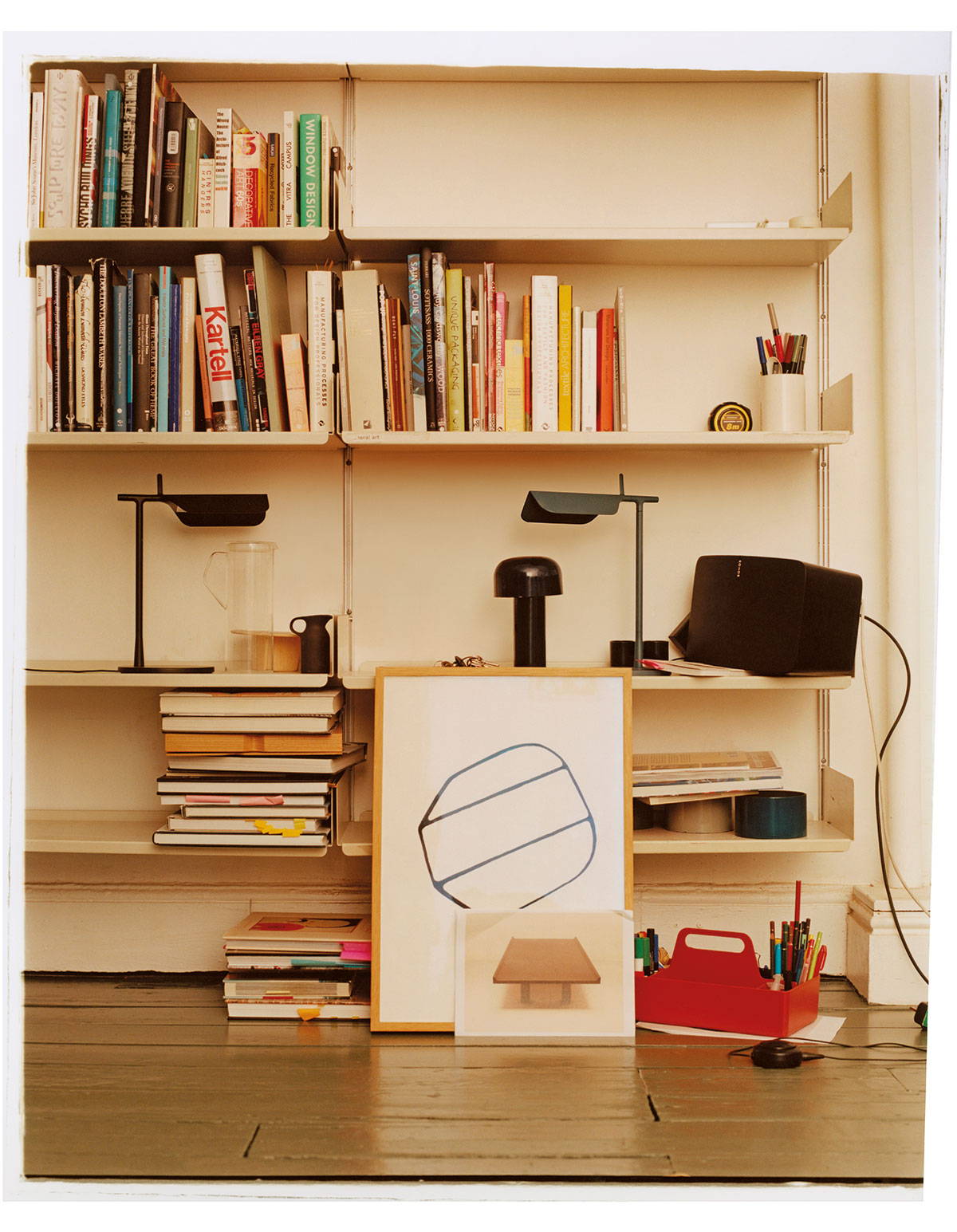 SUJATA BURMAN: Tab and Bellhop are ornamental objects, as much as a light.

EDWARD BARBER: People don't just buy lighting for the home because they give a good light, they have to feel great in the home. I think that is why people are drawn to the Tab lamp and the Bellhop. Especially the Bellhop I think they feel like it's like a friend.

SUJATA BURMAN: What about Bellhop Floor, how did that come about?

EDWARD BARBER: We suggested to Flos that we should make an uplighter as part of the Bellhop collection. So we flipped the top upside-down, but we needed a bit more character for such a large scale lamp. We did this by making the top in glass, which gives a really lovely glow.

SUJATA BURMAN: The colors of the Bellhop Floor include white, brown, green and brick red. How did you choose them?

EDWARD BARBER: It is always pretty intuitive. The thing about color is that it is very transient in relation to design. You pick what
feels right at the time.

JAY OSGERBY: It's a bit like naming children. When you think you’ve got a new color, or a new name, you actually get it out there and you think, it’s a new challenging thing. Before you know it, everybody is doing it.

SUJATA BURMAN: We can’t talk about lighting without mentioning your 2008 commission of the Olympic torch.

JAY OSGERBY: That was a great project. It was quite stressful, but very enjoyable.

EDWARD BARBER: At the Olympic opening ceremony, about 3 billion people are watching on television from around the world so you don't want the flame going out at that moment! When we got the job we did think this is either going to be the best thing we ever did, or the very worst.

SUJATA BURMAN: I know you haven't been able to travel there for a while, but what is it like going to Flos' factory?

EDWARD BARBER: Flos is always fun. They have a really lovely design studio where everything's all set up perfectly for lighting.
They have got all these channels cut into the floor so you can’t trip over the mass of cables. There are different rooms set up so you can test and measure the light levels with automated blinds on the windows. It is highly efficient.

JAY OSGERBY: When you are there, you feel part of the history of the company. You know the people that have been there from
the past 50 years, working on projects. You feel quite fortunate. It's quite common actually in Italy to be in the same place that the great Italian design heroes used to work. It is inspiring.

EDWARD BARBER: When you work for companies that have got an incredible design history, you almost feel that you owe it to
them and yourself to up your game, and come up with something really great that doesn't let the side down. 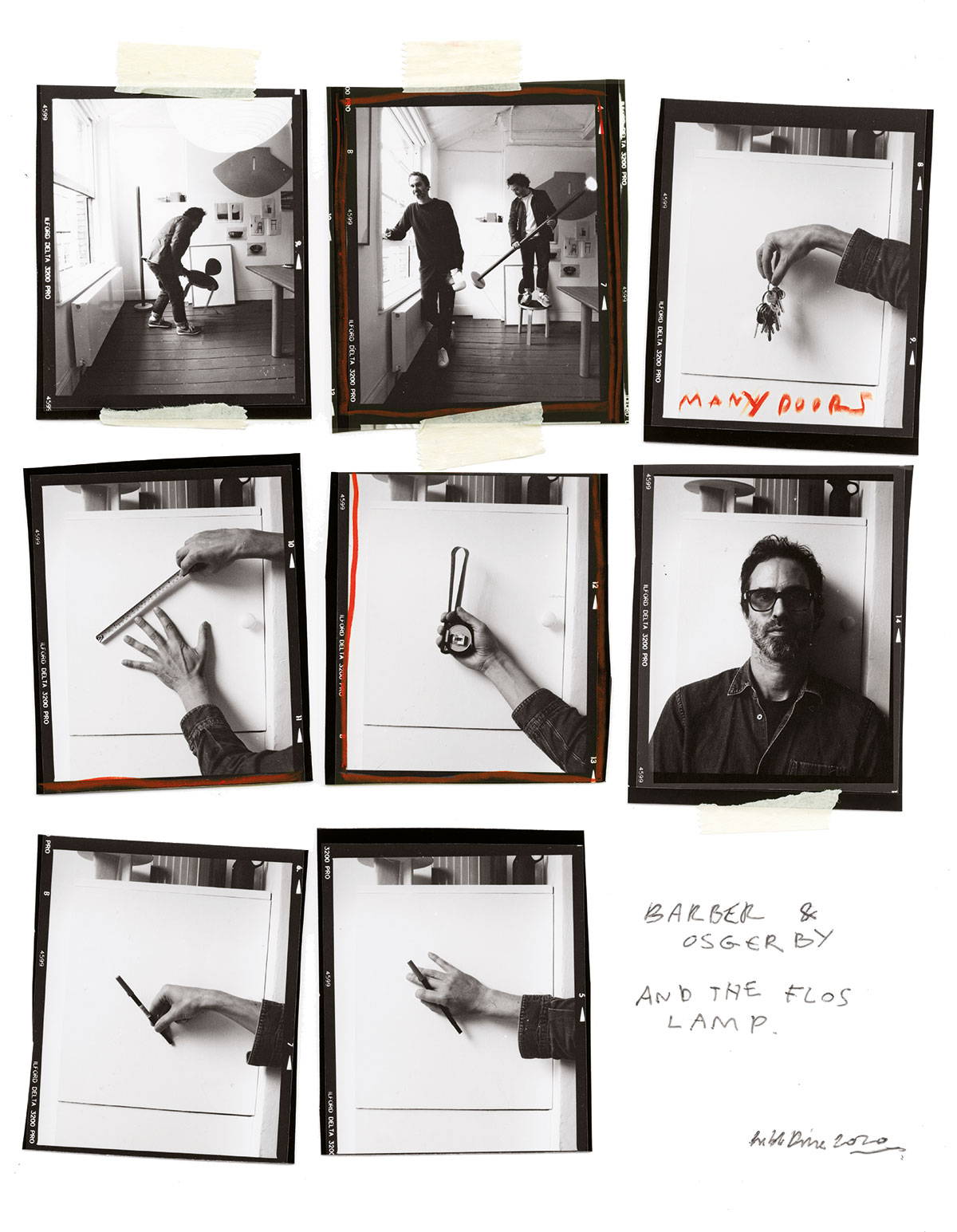 Man vs Machine: the drawings of designers Bouroullec 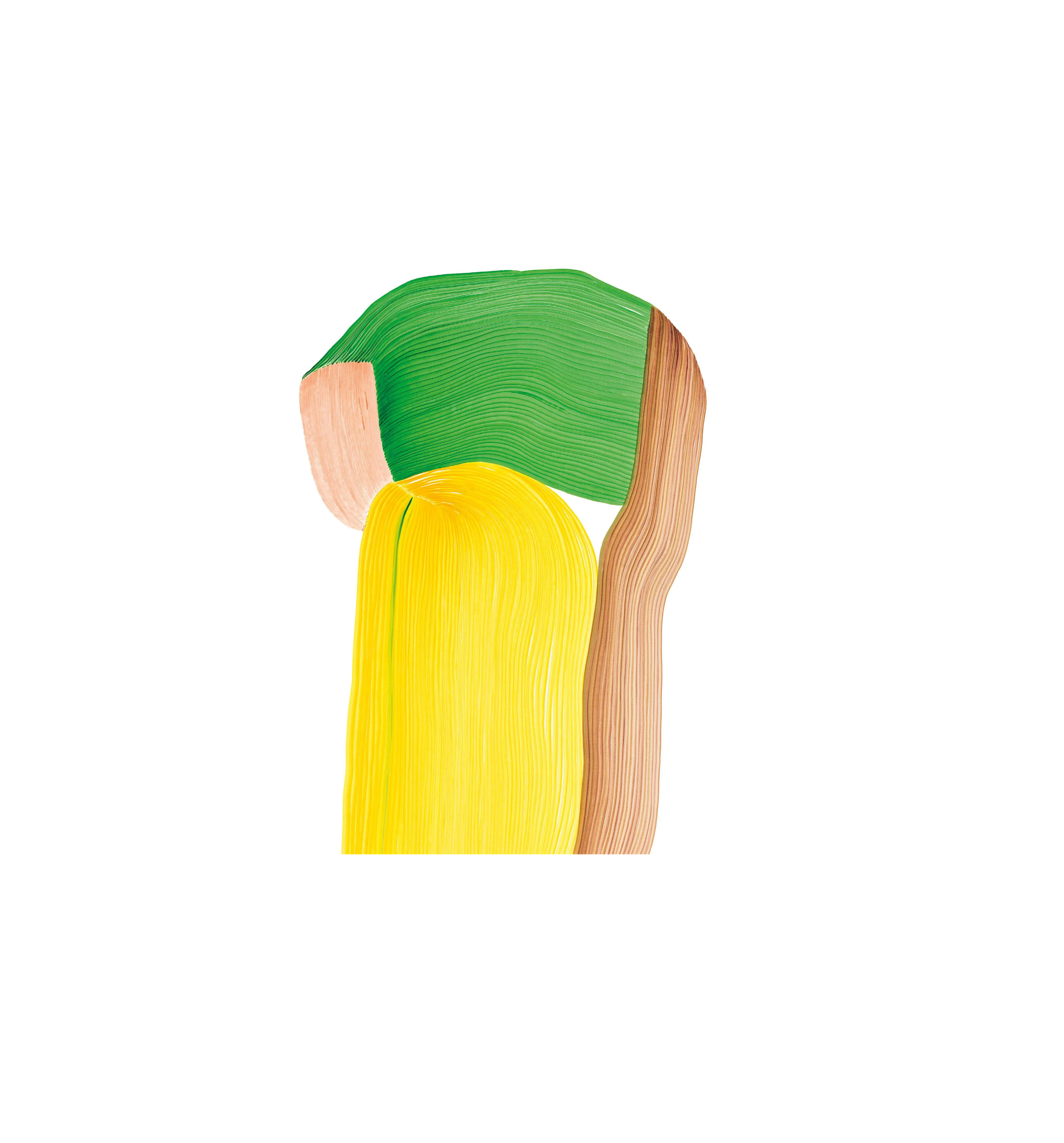